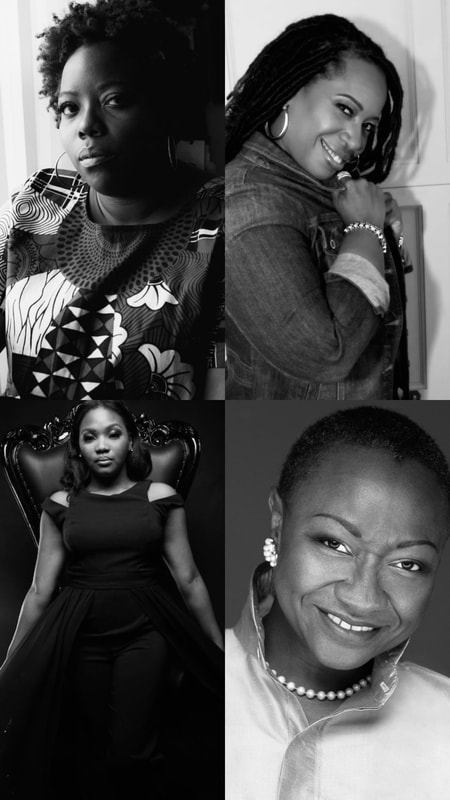 Rhyan McNeil (Nina #3) was born on December 13th, 1984 in Newark, NJ to a family of musicians, activists, preachers, and teachers. From the day she left the hospital, music was embarked on her destiny. Rhyan began exploring music at the early age of three.  She would sing at church, school, community events, and wherever there was a crowd. During high school, Rhyan decided to pursue singing as a career. During her sophomore year, she began participating in pageants and becoming more involved with the school choir. Rhyan’s last year of high school was her groundbreaking year. She starred as the role of Dorothy in “The Wiz” at NJPAC, received the 1st place title of Hal Jackson’s Talented Teens Union County, and was recognized as the best vocalist during a school choir competition in New York City, Toronto, and Canada. During that time, she was also extended an offer to be signed to a record label, but God had other plans. Rhyan decided to do something great for music and pursue a degree in Music Education. She attended Kean University for a year and then transferred to Howard University, earning her degree in Music Education. While at Howard, Rhyan left her mark by being active in her sorority Sigma Alpha Iota International Music Fraternity for Women, singing and traveling with the University Choir, and dancing with the Ooh La La dance team of the Howard University Marching Band. After graduating from Howard University, Rhyan moved back to New Jersey and began her teaching career at Newark Public Schools 2008-present. Rhyan is currently spending her days teaching private lessons and facilitating music for various schools in Elizabeth, Plainfield, Newark, and Westfield. She is the band director for Central High School in Newark, NJ, and sings with her duo Acoustic Soul. Rhyan has enjoyed singing in Rockefeller Plaza and teaching in countries such as Anguilla. In the future, Rhyan plans to open a community center that will provide skills and education in music, dance, theater, arts, and computers to individuals of all ages.

Kim Awon (Associate Director) is a classically trained actor, voiceover artist, acting coach, and director. She has worked at various regional theaters, from Playmakers Rep in North Carolina, Indiana Rep, Actors' Theater of Louisville, and The Long Wharf Theater. Closer to home, she has played Salome at Two Rivers Theater and Olivia in Twelfth Night on Broadway.  She danced and choreographed in Kate's Chinkorama comedy show at Carolines and Joe's Pub and opened for Dave Chapelle in San Diego. She's done independent films, web series, and a string of Drama Therapy performances utilizing the Dragon Fly methodology. Kim is a Juilliard grad, loves her husband and 3 children, and can be seen next as Mercutio in Romeo and Juliet this September.

K. Desireé Milwood (Nina # 1) is a Brooklyn-born Panamanian-American poet and author. Most known for her witty & thought-provoking style of non-traditional haiku, her published works include Poems for My Namesake in 2016, A Womb of Violet: An Anthology in 2019, and A Womb of Violet, Volume II: Blackness, Resistance, and Being in 2021. Her work is currently on display at Newark Symphony Hall as a part of the "Symphony of Survival”. K. Desireé Milwood is also a front woman for The Band Called Fuse for twelve years. The band joins together hip hop, rock, and soul to discuss social & political issues.

Jordan Boyd (Assistant Stage Manager/Custom Officer) is thrilled to be making his debut in Darryl Stewart Productions. Lion King Jr., Peter Pan Jr., Union High School Performing Arts Company (UHSPAC), Kean University premiere stages, One Night Only, The Life of Richard Allen, Our Town, and The Magic City Massacre at Theatre Morgan are among his recent/favorite credits. He is thankful for the opportunity to work in this production with such a talented cast & creative team, and he expresses love and appreciation to his family and friends for their love and support!

Kia Stewart (Nina # 2) is a rising soulful house international music artist. She was first introduced and fell in love with music, acting, and singing at age 5. Kia would sing in church, school chorus, and plays. Now she is living out her dream by singing and writing, as well as arranging and performing music worldwide. Kia Stewart’s music can be found on all music platforms!

Joy F. Brown (Nina # 4) is a native of Newark, NJ.  She was born into a musical family, and was constantly encouraged to find her voice by her parents, Ernest and Laura Brown.  Ms. Brown received her initial musical training in the Pentecostal church, under her father’s tutelage, as a singer and musician.  She began singing solos around the age of 5.  In the church, Ms. Brown developed her lower register and tapped into the ability to “feel the spirit” of a song.  The ever-present “call and response” method, prominent in the church then, taught her the importance of connecting with the listener.  This old Gospel tradition would turn out to be one of her greatest assets as a vocalist. Ms. Brown attended Arts High School in Newark, NJ, where she majored in Vocal Music studies.  During her years at Arts High School, she was encouraged to explore and cultivate her higher register with the aid of teachers such as Dr. Carol Fabrini and Dr. Robert Howard. Due to this training, she was able to develop a four-octave range. Ms. Brown attended Immaculata University, where she concentrated on studies in Music Education and Music Performance.  At Immaculata, she studied the classical Bel Canto technique with her vocal coach Delores Ferraro.  In 2010, Ms. Brown worked in conjunction with WHYY-Philadelphia during their International Film Festival, where she co-produced and wrote the original score for a short film, which paid homage to the French Impressionistic period, entitled “The Compulsion to Create.” In 2016 she decided to move to New York City to study and pursue a career as a jazz vocalist and was blessed to study with Jazz and Bebop legend, Dr. Barry Harris. In 2018, Miss Brown debuted at Carnegie Hall as the featured soloist in a duo concert honoring Duke Ellington's Sacred music. In 2019 she was fortunate to co-star in “Swinging with Dinah, Bessie, and Fats,” a production written by Broadway legend Linda Twine.  In the Fall of 2019, she toured North-Western and Southern Europe.  She performed in 2020 at the 24th Punta Del Este Jazz Festival in Uruguay, South America.  In 2022, she became the lead vocalist for the Harlem Renaissance Orchestra.  Ms. Brown has performed at reputable venues such as The Metropolitan Museum of Art, Casa Cipriani, The Sag Harbor Jazz Festival, and Grant’s Tomb and continues to perform at Jazz clubs and venues throughout the New York City area, Nationally, and Internationally.

Daryl L. Stewart (Executive Producer/Director) is an award-winning actor, director, producer and educator. His acting credits include memorable roles in productions of Aida, My One and Only, Into The Woods, Five Guys Named Moe, Ragtime, Carousel and Little Shop of Horrors. Most recently, Stewart was featured in a short film adaptation of the Broadway musical, The Gospel At Colonus. His one man show at The Triad Theater, The Beauty That Remains , was nominated for a 2021 Broadway World Award for Best Cabaret. Inspired by multihyphenates like Billy Porter, Geoffrey Holder and Andre De Shields, Stewart works regularly as a theater maker/actor and director. His directing/choreography credits include productions of Step Show: The Musical (Shepherds University), Hairspray (UCPAC), Hear Her Roar (Newark Symphony Hall), Simply Simone: The Music of Nina Simone, This Wonderful Life (Luna Stage), An Incomplete History of Broadway (vala/digital), Dear Tina: A Love Letter To Tina Turner (GreenRoom42/Off Broadway), The Amen Corner and Into The Woods (Vanguard). Stewart has worked with Papermill Playhouse, Disney Theatrical Group, The Johnny Mercer Foundation, MASS MOCA, 62 Center for the Arts, Union County Performing Arts Center, Triad Theatre, Playwrights Horizon, Cohoes Music Hall, Luna Stage Theatre Company and New Jersey Performing Arts Center. ​Most recently, Stewart hosted and executive produced a new live performance series entitled Broadway in the Bricks at the Newark Museum of Art. Stewart also hosted and executive produced The Equality Ball, one of New Jersey's largest annual fundraisers. A passionate educator and arts education advocate, Stewart's speaking engagements include lectures, panels and performances at Williams College, Kean University, Shepherd University, Monmouth University (Conference on Race), NJEA Convention, Art Educators of New Jersey Conference, East Side High School, Cicely Tyson School of the Performing Arts, RISE Academy, Paulo Friere Charter School, North Star Academy, Academy of the Performing Arts at UCTVS, The Pingry School, Mary Help of Christians Academy, Burnet Middle School, Union High School, St. Benedicts Prep and Seton Hall University - School of Law. He is also a sought after teaching artist and facilitator at the New Jersey Performing Arts Center - Center for Arts Education with 10+ years of experience. Stewart is the co-founder of Vanguard Theater Company and the founder & CEO of Daryl Stewart Productions, a black-owned and operated storytelling and production company. He recently made history as the first Theatre Curator in the history of the Newark Arts Festival and will serve as Visiting Performing Arts Curator at the Newark Museum of Art (NMOA). He is the recipient of the NJEA Alumni Award of Excellence, Eulace E. Peacock Award, NYU Wasserman Award for Service in the Arts and an Urban League Young Professional Honoree for the Arts. He sits on several boards and advisory councils. Education: NYU (BA/Professional Certificate), NY Conservatory for Drama. Union: Stage Directors and Choreographers Society (SDC). He can be reached via social media: @thedarylstewart. He lives, works and plays in Newark.